Pioneers in Skirts is a multi-award-winning social impact film about the issues that affect a woman’s pioneering ambition. Real-life stories and frank commentary leave viewers seeing their role in the solution, feeling hopeful, and motivated to act.

A Movie About Ambition

the film is a catalyst for meaningful conversation about cultural bias, sexism, and unfair stereotypes.

Pioneers in Skirts follows Ashley’s journey as she examines the barriers and setbacks women confront in their careers. Analyzing the stereotyping and sexism that can chip away at a woman’s pioneering ambition, this social impact documentary aims to show the audience what we ALL can do to change it.

Many women battle a bias that is eroding their ambition. There are mountains of research (study after study…after study) that reveal women start out their careers with more ambition than men, but as soon as 2 years out of college women’s confidence and ambition plummets by over 60%. These declines came independent of marriage or motherhood status. And, this phenomenon affects women across professions. Why the dashed expectations?

The film is an engaging social conscious documentary that addresses the stereotyping and sexism that can chip away at a woman, hurt her potential, and make her feel like she must re-think her dreams.

Resources For the media

As ambitious women are forced to maneuver a work-world built for company men, Ashley wastes no time planning her escape while clearing a path for the women coming up fast behind her.

Pioneers in Skirts is a feature documentary examining the need for gender parity in our culture from the perspective of a female filmmaker who was frustrated with her own problems in the film industry.

In an inspiring portrait of perseverance and determination, director Ashley Maria expands her search to include other industries and society in general. She shares her own story, but she follows the journey of 3 girls on a robotic team, their fathers, as well as a young mother – all while traveling the U.S., speaking to fellow pioneering women and topic experts who had solutions to share.

Ashley Maria entered her career as a film director feeling excited and prepared for what's to come. She attended one of the top film schools in the world and even won the Directors Guild of America award for her student film "Friday Night Fright." She knew a career in film would be difficult but was quickly disheartened by the amount of times she was referred to as a woman-director, as if she hadn't yet earned the right to be called a Director. Her male colleagues were getting hired all around her, while she just looked on wondering "What did I do wrong? Am I not working hard enough?"

Ashley looked beyond her own situation to see that her female colleagues were faced with similar obstacles. Sure, they all were making films, but with limited budgets, not much pay or entirely for free! Rather than getting discouraged, Ashley got to work.

Right at the start, Ashley knew she needed to make an honest film that investigated the shocking experiences she and her friends were having. And she knew that this clearly was a very big issue for women everywhere – not just in the film industry.

Ashley made Pioneers in Skirts in partnership with her Mom, Lea-Ann W. Berst. The hope of finding solutions for Ashley’s personal career dilemma gave the two fuel to keep moving forward despite the many challenges that go along with making a feature film. They were also met with personal confrontation for the topic of gender bias. They were told “you are rocking the boat,” “this issue is in the past,” “Ashley’s just being a millennial,” and…their favorite… “you are going to hurt your career by calling out the film industry.” That hostility was countered with optimism and hope from those experiencing exactly what Ashley was experiencing. Ashley and Lea-Ann had access to honest conversations with people they never thought they’d have the chance to meet – let alone have long discussions. They made true friends and allies along the way.

Pioneers in Skirts grew into an overarching search for strategies and action to advance gender parity in our world. In 2020, the film was released and spent a majority of 2020 streaming online – being part of movie watch parties that sparked the conversations and realizations Ashley and Lea-Ann had hoped it would. Audiences discuss their feelings after seeing the film. They want to course-correct; sharing that they realize how they, too, have played a role in perpetuating stereotypes of women.

The challenges in Ashley’s career transformed her career. Making a feature film about what can affect a woman’s’ ambition has allowed Ashley to find her own purpose and shape who she wants to be as a leader. The lessons learned have influenced how she runs her set – always working towards creating a more inclusive and equitable work culture for her and the crew that she hires.

Today, as Pioneers in Skirts spends 2021 screening around the globe at organizations, in peoples' homes, and during the Pioneers in Skirts Impact Relay -- Ashley and Lea-Ann hope those who watch the film, too, add “advocate for women and all marginalized groups” to their personal and professional path.

Who's In The Film 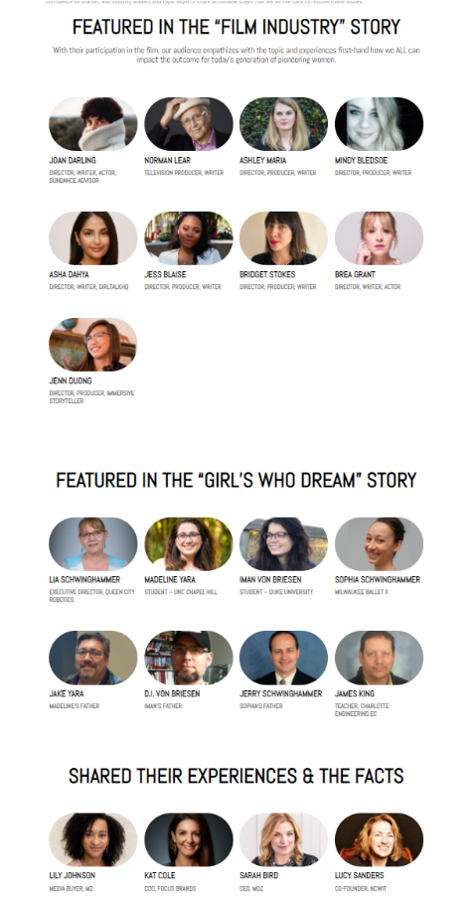 When we started pre-production planning and test-filming in 2013, we were challenged to convince people of the unique obstacles women face in their careers. As time went on – the publicity of the book Lean In and the Me Too movement helped people develop a more sophisticated attitude towards the issues.

We kept with our plan and followed 3 teen girls learning how to work with the boys, a woman who was up for a raise when she found out she was pregnant, and Ashley – our director who found herself beginning to doubt her aspirations soon after graduating with her Masters in film.

Ashley’s story is the through-line of the film. She travels the U.S. speaking to experts and people with experiences to share.

With over 40 years of conventional advice that’s been given to women, we haven’t even come close to closing the gender gap at the top. With the participation of several honest and brave individuals featured in the film, our audience will see how we ALL can impact the outcome for today’s generation of pioneering women.

When audiences view the film they see a broadened perspective and awaken with a sense of responsibility and empathy. They leave the screening wanting to take action.

Our aim is for individuals to draw tangible connections between the topics addressed in the film and the issues that most impact them, and be incentivized to develop strategies for change.

Who's screening the film?

We made this film for:

A) The many young women who need to know: You Are Not Alone. She is typically a woman who –

B) Parents / Mentors / Teachers. They typically –

C) The women and men who want to do something about what they see around them, but don’t know where to start.

LaBelle Theatre • Thanks Plain and Simple!

Contact us to schedule an interview with Director, Ashley Maria and Producer, Lea-Ann W. Berst.

Pioneers in Skirts Director and Producer

This dynamic daughter-mother duo took on Hollywood to begin a journey to decode the chipping away of women's ambition. As an award-winning film director, Ashley felt the pushback for director jobs while her male counterparts were getting hired.
Lea-Ann fought the same limiting gender bias as a woman with decades in the tech industry. She had to ask the question with Ashley, "why are we still dealing with this?"
The resulting social impact documentary film, Pioneers in Skirts, opened wide the doors of conversation with frank commentary and a story that might just be your own.
Short and long biographies are available on the About page.
Contact: PioneersinSkirts [@] gmail.com

Organizations use Pioneers in Skirts to understand their people better and give their audience a broadened perspective of what’s really happening in the world around them. Read the stellar endorsements of the film! Movie Endorsements

Researchers and advocates have drawn attention to the issues of gender inequality and how we all can affect change. Here are a few resources to help you report about BEING A PIONEER!  RESOURCES

Designed for our friends in the media and the organizations hosting a screening of the film, these video clips and images can be freely reproduced.

We ask that the press credit images and videos to Pioneers in Skirts® / Ashley Maria Productions, LLC.

VIDEO – All video clips can be found on our Pioneers in Skirts Vimeo Channel. We’ve organized the video clips into 4 categories: Career Advice, General Purpose, The People in the Film, and Promotional Videos.