When it comes to gender equity in the workplace, many people think that working women are much further along than they really are. With all that is being written and said about the need for women to get a fair shake in their careers, and with the abundance of studies and popular movements the press is eager to cover, it’s not only surprising that people aren’t as aware of the issues as they should be, it’s shocking there hasn’t been a resolution to the problem.

An inspiring story of women pioneering in their careers, Pioneers in Skirts™ features relatable storylines, as well as impactful strategies women and men both can use to deal with, and improve upon, the challenges that working women face today. 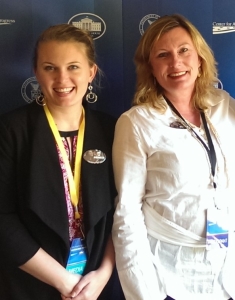 We’ve had some amazing “ups”

We started the pre-production phase of the film late in 2012, and since then we’ve had some pretty amazing things happen. We were honored to represent the film at a White House Summit, be asked to speak at corporate women’s groups, become part of the news, and land some incredible on-camera interviews with some of the most dynamic and brilliant people.

The “downs” are unreal

But what we hear all the time is… “I’m tired of hearing about women’s issues.” “Women just need to stop whining and stop getting in their own way.” — from women and men.

Sadly, we often feel we need to prove there really is a problem that needs to be fixed. Instead of focusing all of our time on making a film that aims to change things for the better, we need to also explain why all the books and Ted Talks out there are great…but are not always relatable, and not always enough. 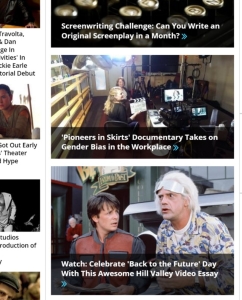 Then, Indiewire announces they picked Pioneers in Skirts as their Project-of-the-Day. What’s so big about that? Well, when Indiewire throws your film out to the world, on their home page…just above the “Back to the Future” coolness, it’s real.

We were recognized as filmmakers trying to make a film.

Thanks Indiewire. We needed that :-).

The Project-of-the-Year winner for 2015 will get bragging rights, a story announcing the news and the chance to attend The TFI Filmmaker and Industry Meetings during the Tribeca Film Festival in April 2016.

Okay, that would be incredible.

But really, Project-of-the-Day is much appreciated.