HOW THIS WOMAN-CENTRIC FILM REACHED ITS KICKSTARTER GOAL

PIONEERS IN SKIRTS ® — DGA-award winning Director Ashley Maria and Producer Lea-Ann Berst are celebrating a successful finish of a month-long Kickstarter campaign. Funds raised will allow them to finish production and move onto the editing of Pioneers in Skirts, the documentary film advancing the conversation about women going after a career.

Pioneers in Skirts is a groundbreaking documentary film. Following a life-changing realization about her own career as a woman shortly after she graduated with her Masters in film, cameras have accompanied Ashley on an intimate journey to discover why women still face unique biases and societal pressures in their careers today. The team is investigating to find out why this happens and the strategies to overcome. 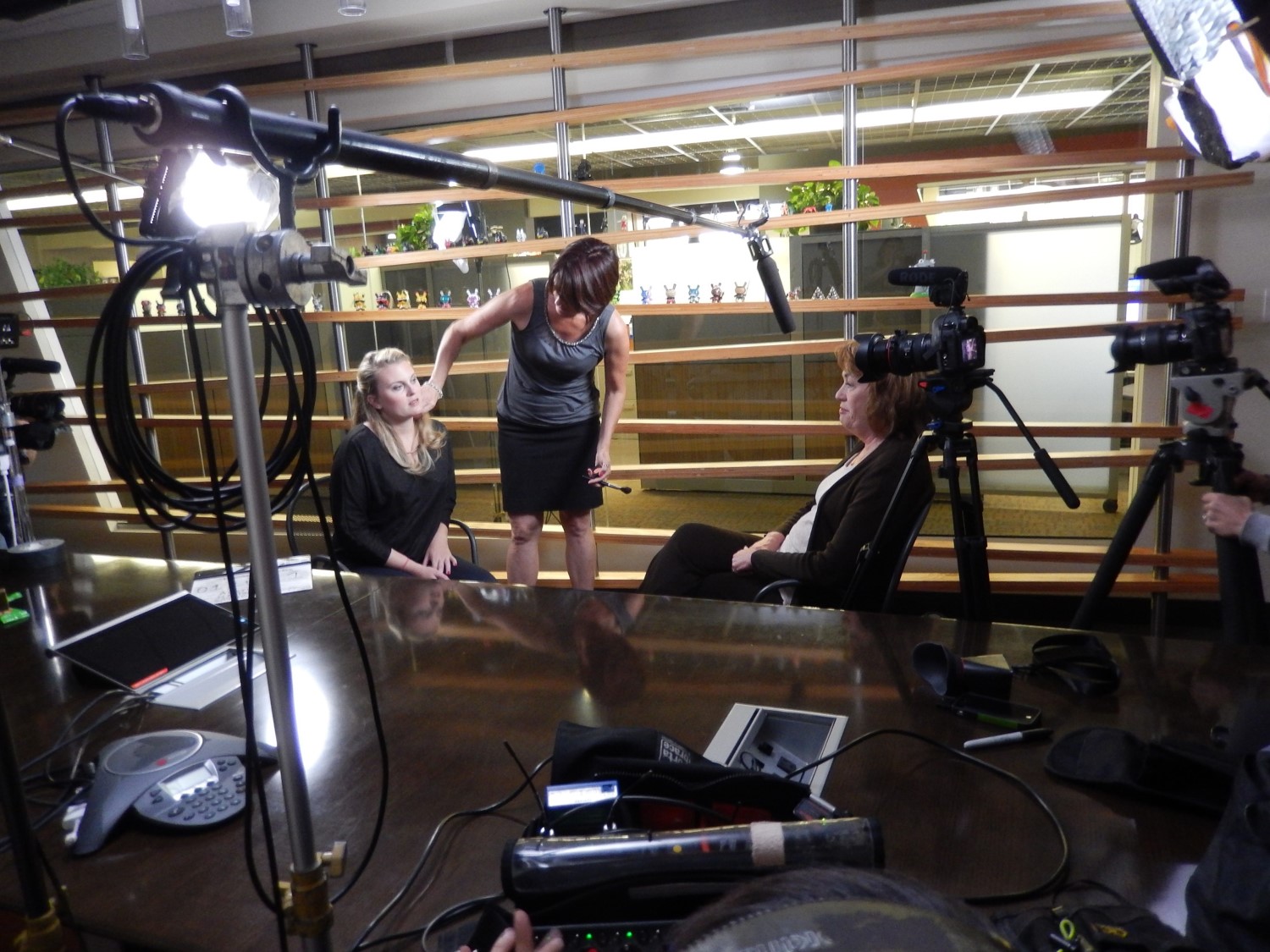 Through her travels, Ashley has interviewed some of the nation’s top female and male leaders who share their experiences and lessons-learned.  The film follows compelling young women who are just now realizing their dreams for their future and a new mother trying to make sense of the so called “mommy penalties” she is experiencing.

Described as a “nail-biter” moment, just three hours before the deadline the filmmakers were still ~$4000 short of their goal.

“I rushed home from a film set in Los Angeles,” says Ashley, “and it was already midnight for Lea-Ann in North Carolina. Over the past 30 days we had been working around the clock to bring in more supporters and encourage others to phone, email, and post on social media to help us.”

The team also worked to drive up buzz via article/blogs/podcast interviews and develop videos that informed and engaged, like:
– meeting a funding challenge that involved singing with a superhero character on Hollywood Blvd
– debuting a 360 viewing experience explaining “why this film, why now”
– several behind-the-scenes clips, and introducing future mascots.

“It was now the final hours,” stated Ashley. “All we had left to do was hope – and keep posting live videos and comments on social media.”

Beginning at 10pm, Ashley posted Periscope live videos, tweeted and posted a play-by-play on Facebook. The social media posts proved to help because in the last few hours, much-needed large pledges came through which then triggered smaller pledges to make up the difference. 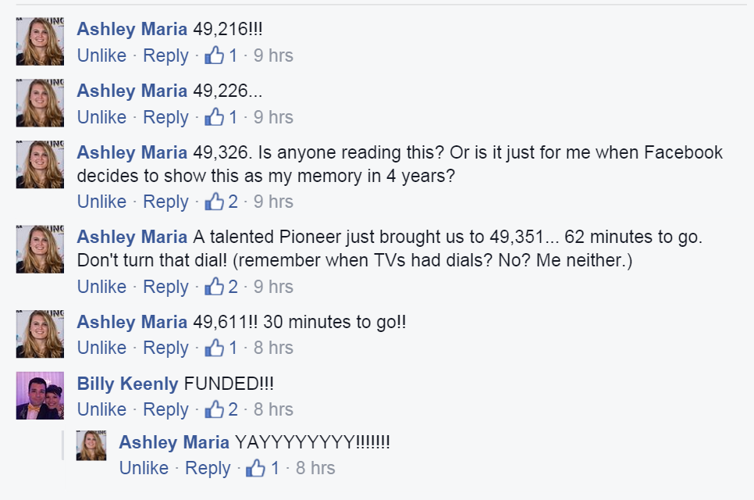 Gratitude for the support

“I owe my greatest gratitude to the team around me. People from all over the U.S. have volunteered their time to help us make this film – some who have been a consistent presence of support and some who heard about the Kickstarter and reached out to help make the campaign a success. Many sent personal emails to their friends and family asking for pledges,” stated Ashley. “People that we never met reached out to their colleagues to recommend us for stories and interviews. And in the last hours, they were up late with me too. I could see them shouting on social media to make sure we made our goal!!”

From the women and men who were featured or interviewed for the film, to friends, family and total strangers – backers stepped forward to send the message of, “Let’s finish this film!”

Among their backers were numerous members of the North Carolina Business and Professional Women’s organization – and the organization itself. The leadership team rallied behind the Pioneers in Skirts Kickstarter in support of their two members – Ashley and Lea-Ann. Several other women’s organizations stepped up to promote the campaign to their members, including the SAP Business Women’s Network, IEEE Women in Engineering, and the SAS Women’s Initiative Network.

“It was humbling to see how many women had our back,” shared Lea-Ann Berst. “It also affirmed to us we were making a film that women and men both wanted to see, and needed.” 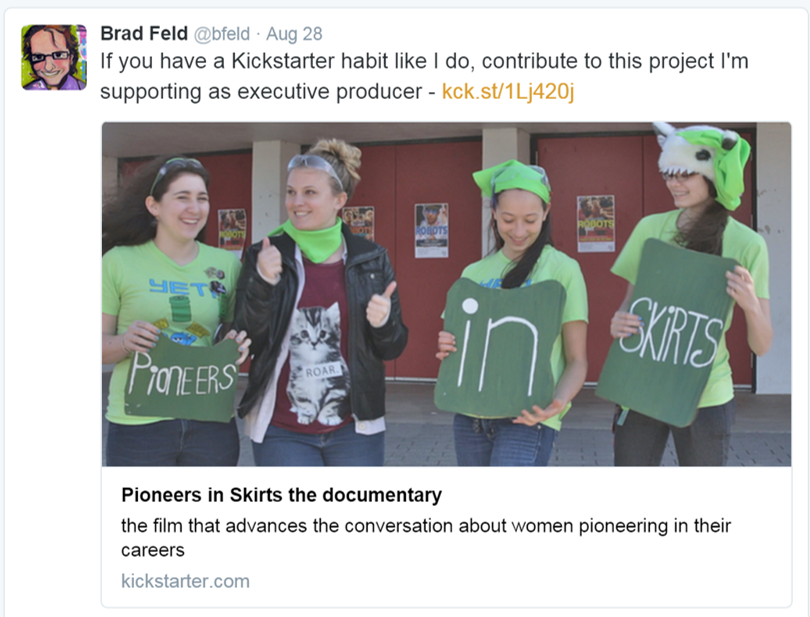 Opting for the Executive Producer Kickstarter reward, Brad Feld of the Foundry Group stepped forward early on in the campaign to not only support the fundraising effort, but he often asked his colleagues and followers to make a pledge too.

“When we were strategizing about high-dollar rewards that would represent the essence of our mission for the film, we reached out to three of our interviewees and received an immediate ‘YES,” explained Lea-Ann. “Three industry experts – Kat Cole with Focus Brands, Brad Feld with Foundry Group, and Sarah Bird with Moz agreed to be a Kickstarter reward; speaking to a $500 backer for 30 minutes about any business or career topic. We knew these brilliant business leaders didn’t have much free time in their lives…so we knew their ‘Yes’ meant they believe in us. That just means the world to Ashley and me.” 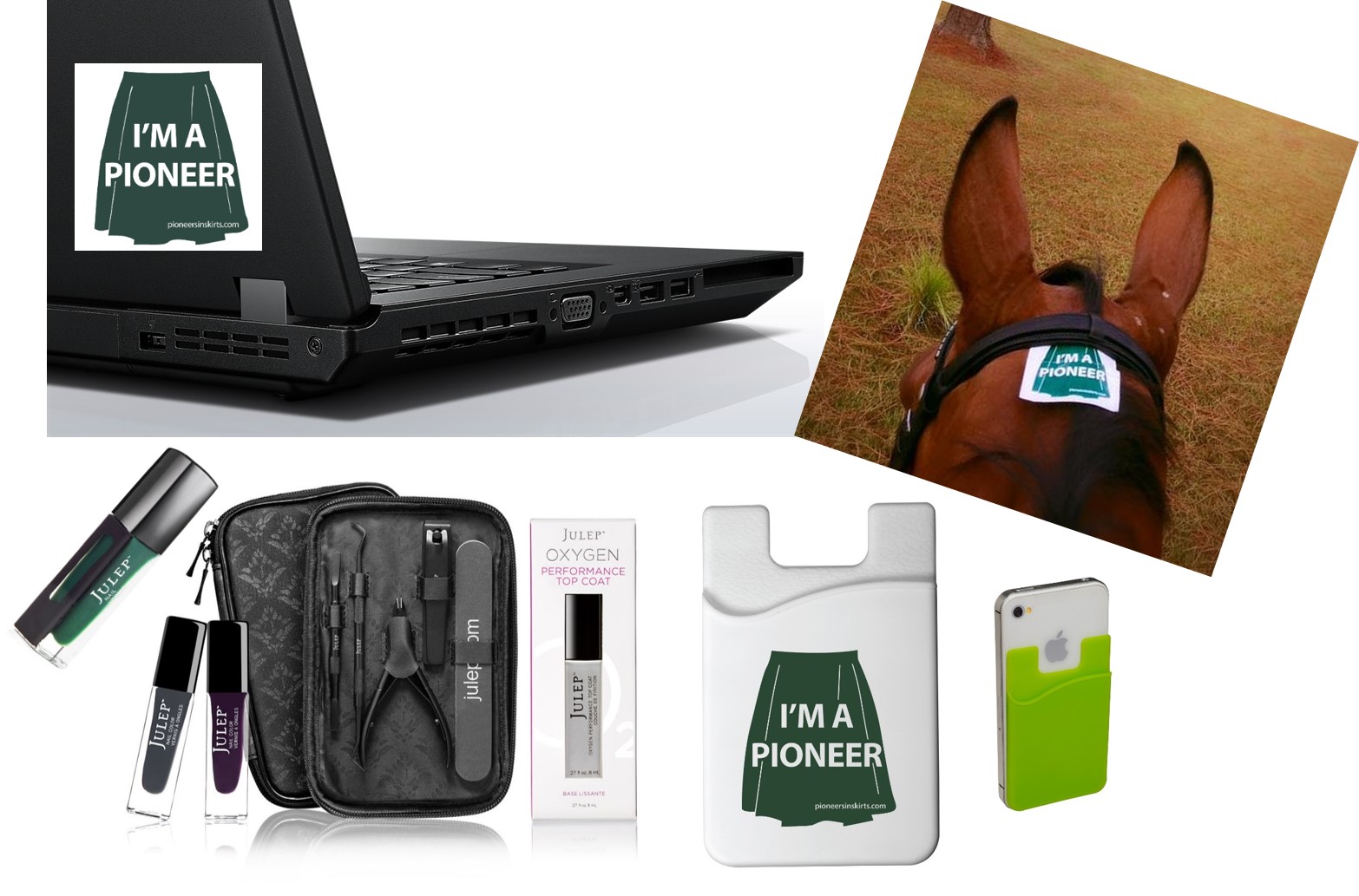 Prior to launching the Kickstarter, vendors stepped forward to lend a hand! Julie Powsner with Adpro created and donated the “I’m a Pioneer” tech stickers and mobile phone pockets. Jane Park with Julep donated deluxe manicure kits and nail polish so that the filmmakers can offer an “It-Girl Glam” reward package.

Prior to the launch of the Kickstarter the filmmakers lined up initial backers and they lined up the press. “Previously, we were brushed off as a no-news item because the film wasn’t yet complete,” noted Ashley. “But the minute we launched our Kickstarter campaign, the press were open to learning more about us and our story. We ended up receiving a ton of press!”

Pioneers in Skirts was ready with a press-friendly website that would allow the media to learn more about the film, its background story, and download images and videos for their stories. 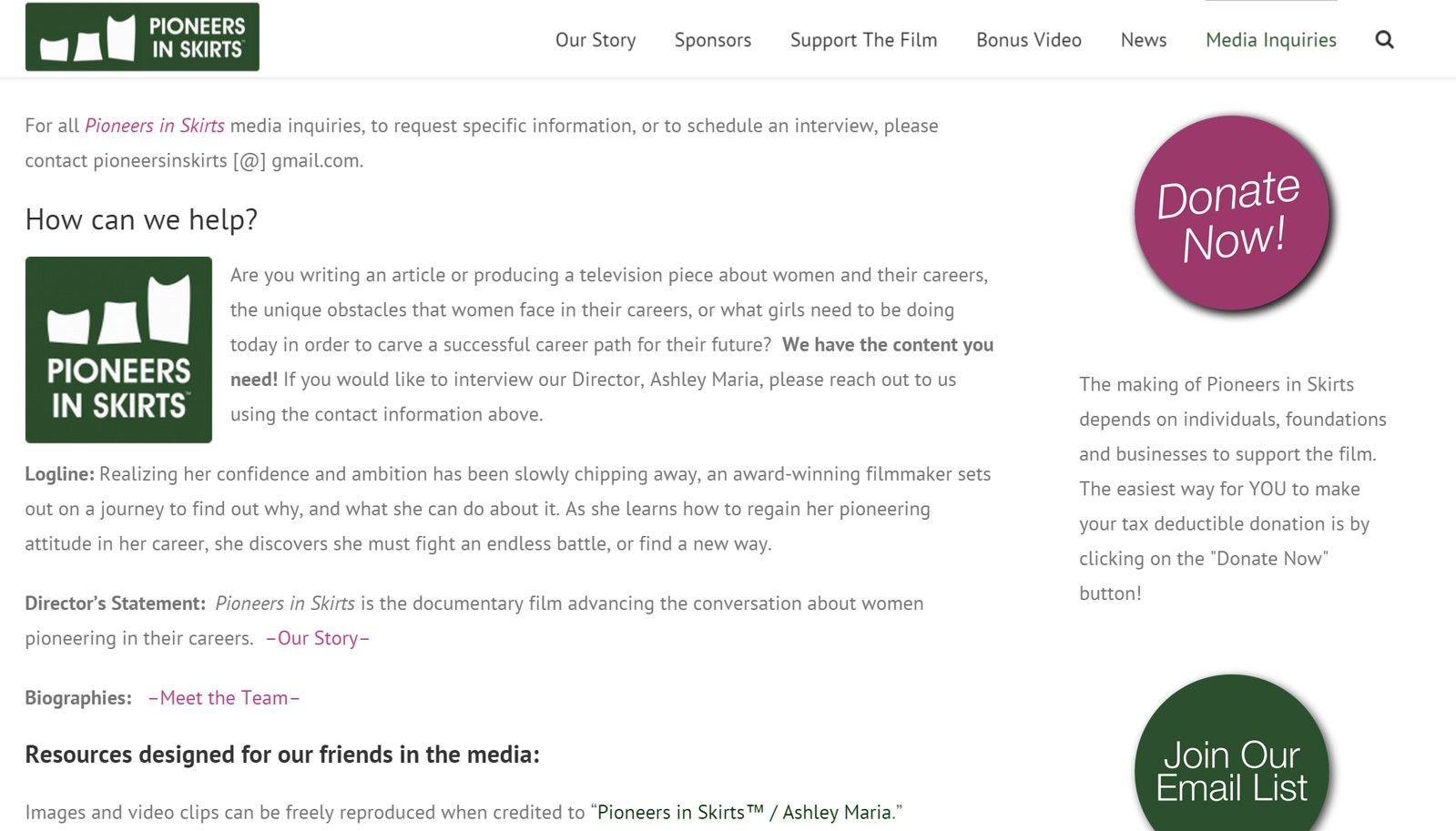 “We’re excited Gravitate came in when they did,” said Lea-Ann. “One month before the launch of the campaign, Gravitate stepped forward as our website sponsor. A global digital marketing and design agency with proven cross-industry expertise, Gravitate advised us as to what we needed and worked overtime to launch our new website before the Kickstarter. We were ready to impress!”

The filmmakers plan to use the raised funds to finish up topic-expert interviews and Ashley’s personal story line as a director in the film industry, as well as continue the transcribing process of footage and then move into a full-time editing work effort. “We have a lot of footage and need a dedicated editor to work through it,” said Ashley. “I am so excited to have the funds now to hire an editor full-time while we finish filming!”

If you missed out on the Kickstarter, the filmmakers still need financial and in-kind help to finish the film!

You can make your tax deductible donation here and contact them via their website. Pioneers in Skirts is a film for women and men of today, and for future generations.  “We are discovering the solutions,” exclaimed Ashley, “and we can’t wait to share them with the world!”

Find out more about this film by visiting: www.PioneersinSkirts.com.