European Premiere of Pioneers in Skirts

LOS ANGELES, CA, USA, January 5, 2021 — Ashley Maria, the director best known for her work in comedy and horror films, has announced the European premiere of her film about the inequalities that are impacting and shaping her career.

Pioneers in Skirts is a multi-award-winning feature documentary about the issues that affect pioneering ambition and the ongoing effort to achieve gender parity in our culture.

The film will premiere at the Paris International Film Festival 4-12 February, 2021. Festival goers who want to see the European premiere of the film and participate in all of the film festival’s virtual cinema screenings, events, panels, and filmmaker Q&As can secure day passes here: www.goelevent.com/ParisInternationalFilmFestival/Pass/Sale. 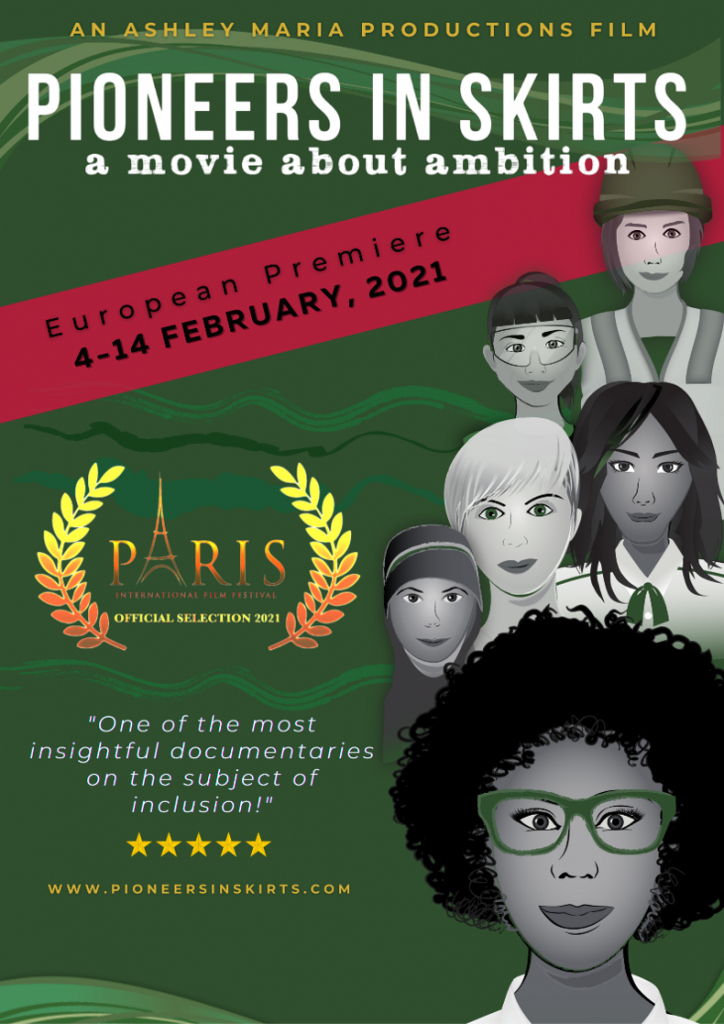 “I’m very proud to see how Pioneers in Skirts is motivating viewers to re-evaluate the world around them and their place in it,” shared Ashley Maria. “The film’s Producer, Lea-Ann W. Berst, and I have participated in many post-screening impact discussions this last year surrounding topics featured in the film. Viewers share with us what they are confronted with on a daily basis, and they tell us they feel motivated to take steps toward change. They want to make a difference.”

Pioneers in Skirts follows three teen girls on a co-ed robotics team facing an upcoming state-wide competition, a new mom fearful her pregnancy news will fault her raise negotiations, and Ashley – our director – who finds herself doubting her aspirations, even though she had been dreaming of this career her entire life.

Focusing on various elements to help make this story relatable, Pioneers in Skirts dives into the Film Industry and the Girls Who Dream Big cultural narrative while also offering People with Experiences and Facts to share and Cultural Moment clips from popular television shows and films – all to build the audience’s empathy necessary for change. Television icons Joan Darling and Norman Lear as well as up-and-coming female film directors help set the scene of what is happening to women as they start their careers. 13-year-old teen girls and their fathers open up about what it is that causes a girl’s confidence to shatter, and industry leaders and topic experts share actionable steps that we all can take to resolve these issues.

Pioneers in Skirts intended to launch during the early months of 2020 – during a time when the world was attempting to understand how best to respond to a global pandemic.

“We were preparing for a major IMAX launch in April 2020 where the film would be sandwiched between the Mulan and Wonder Woman movie releases,” explained Producer Lea-Ann W. Berst. “It was to be an amazing achievement for a social impact documentary!”

Instead of realizing their movie launch dream scenario, the team behind Pioneers in Skirts responded to the changing landscape by bringing the film to the streaming market earlier than planned.

“In 2020 we kept our focus on the big impact the film can have on a global society — and laid the foundation for a 2021 plan of using the film, and the activation efforts surrounding national-focused screenings around the globe, to cast a broader scope of awareness for the need to address gender equality and human rights issues,” continued Berst, whose past experience of running a global Olympic torch relay will guide this effort.

The plan is to re-ignite governments, civil society, businesses, and other stakeholders to work to eliminate discrimination against women and girls and to achieve equality in all areas of life.

“With projections showing that women are being disproportionately affected by the pandemic,” said Maria. “We want our film to be used to help push for women to be at the heart of pandemic recovery efforts.”

For more information on the film, Pioneers in Skirts, and their Paris International Film Festival European premiere, visit the movie website. Click here to contact the Producers.

With a strong focus on diversity in the filmmaking community, the upcoming 2021 edition of the Paris International Film Festival will present diversity-inclusive films of all genres, with 44 films and TV pilots, of which 27 are directed by female-identifying filmmakers (60%) and 15 are first-time directors’ (34%). The Paris International Film Festival will be held February 4-14, 2021. For more about the festival, please visit: https://www.parisintlfest.com.