Pioneers in Skirts shines an interrogation lamp on gender bias.

RALEIGH, NC (August 19, 2015) – Award winning director Ashley Maria and producers of the film Pioneers in Skirts announced the launch of a new Kickstarter.

Pioneers in Skirts is a film about a female director trying to navigate her career — and sharing how all women can benefit from what she has learned.

Soon after Ashley entered the film industry, she discovered that she wasn’t seen as a filmmaker, she would be forever a hyphenate: a woman-filmmaker.

Ashley graduated from a prominent grad-school, and when she first started out she had already started down the path to achieve her dream career. She was confident and determined. After winning several prestigious awards she felt she could accomplish anything.

But confidence soon turned into doubt and insecurity. Ashley’s drive to dream big in her career chipped away a little each time she realized she wasn’t seen for her professional skillset, but for being a woman who was trying to swim with the big boys.

“Pioneers in Skirts is a film that tells women, ‘You can do this, everything is possible’,” said Major General Heidi V. Brown, Director of Global Operations, U.S. Strategic Command. “When I got the call from the producers I thought this would be a great opportunity to help tell others ‘You can do these things too!’”

With a camera in hand, Ashley decided to find out why this was happening to her? She soon learned she wasn’t the only twenty-something that felt that way…and it wasn’t just happening in the film industry.

Research backs her up A recent Bain & Company survey revealed after just two years of working at their first job out of college, women begin to lose their aspiration and confidence. Both women and men start out equally confident about their ability to reach their career objectives, but after two years in the workforce 34% of men are still aiming for the top, while only 16% of women are. What happens to women during those first two years? And why? The study shows that, over time, women’s aspiration levels drop more than 60% while men’s stay the same. These declines came independent of marriage and motherhood status.

Factoid
Bain Company Survey: 43% of women aspire to top management when they are in the first two years of their position, compared with 34% of men at that stage. But for women who had more than two years on the job, aspiration and confidence plummeted 60% and nearly 50%, respectively. 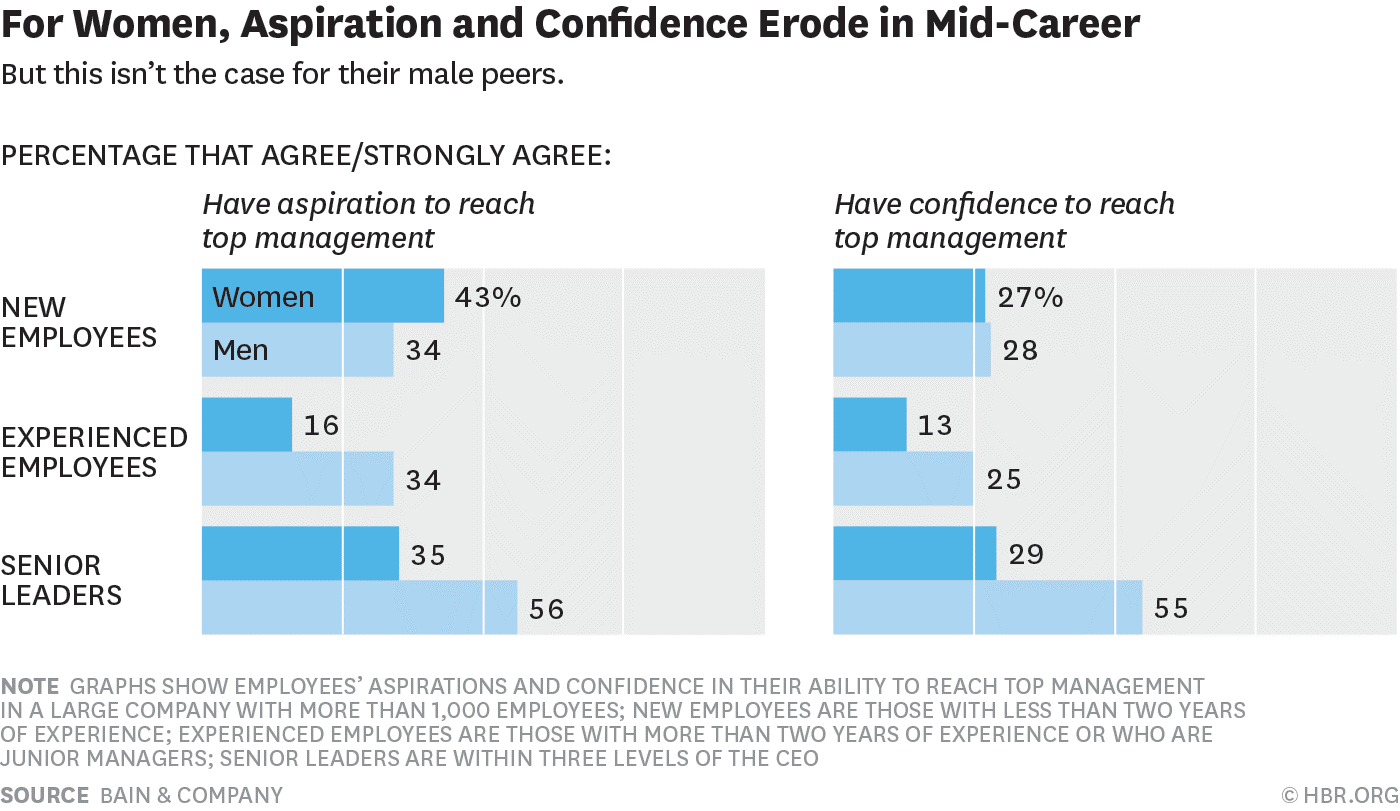 Pioneers in Skirts takes an honest look at the strategies for women now, and for future generations. The film uses interviews, statistics and story-telling to discuss career obstacles women deal with, such as biases, stereotypes and wage discrepancy, in the American workforce.

“When it comes to gaining not only financial support but raise awareness of a film’s story,” noted Ashley Maria, “Kickstarter is an independent film maker’s best friend.”

When complete, the team behind Pioneers in Skirts wants the film to be a catalyst; providing a legacy for people, communities, and companies they will continue to build-on.

“A lot of my life is focused on helping women elevate themselves, and helping companies and communities learn how to elevate women,” shared Kat Cole, Group President Focus Brands. “Pioneers in Skirts’ mission and purpose is very much aligned with what I believe in. The film will be able to share a legacy for people that hopefully other young filmmakers and other young people out there just continue to build on. It’s very, very cool what they’re doing.”

“We have had amazing support thus far and were encouraged by our supporters to launch a Kickstarter campaign,” said producer Lea-Ann Berst. “And since our goal with the film is to spark hard conversations necessary to change the current workforce climate, we needed a reputable way to connect and engage others interested in this complex issue.”

A successful Kickstarter will help the film finish production and transition into post-production. Backers will receive rewards ranging from items such as personal phone calls with industry leaders or the director herself, to behind-the-scenes experiences on set or during the post-production phase.

About Pioneers in Skirts
Pioneers in Skirts follows our director, award-winning filmmaker Ashley Maria, after she discovers she is no longer the ambitious, confident woman who entered the film industry. In only a few years time, Ashley lost her pioneering attitude in her career. With a camera in hand, Ashley learns she isn’t the only twenty-something that feels that way, and seeks to find out Why? Find out more by visiting: www.PioneersInSkirts.com.

Ashley Maria is the director, producer and co-writer for the feature documentary Pioneers in Skirts.  With over 10 years of experience in film and television production, Ashley Maria is a writer and director, as well as a freelance production sound mixer based in Los Angeles, California.

She is an award winning director; winning awards at highly acclaimed film festivals around the world. Ashley Maria was awarded the prestigious Directors Guild of America award for her film, Friday Night Fright™ in 2010.

In 2014, Ashley Maria was featured by the DGA as a director who represents “the future of women in film.” Find out more by visiting: www.ashley-maria.com.