Is it possible to feel so small yet so large all at the same time? If it is, then that was me on Monday as I walked into the United Nations General Assembly.

The UN’s Commission on the Status of Women promotes women’s rights and documents the reality of women’s lives throughout the world. It also helps shape global standards on gender equality.

The organizers did tell me and my fellow NGO* Young BPW delegates every step of the way – “You WILL feel overwhelmed. There are over 400 events to attend so you must strategize. You need to figure out what event will do the most good for your personal goals.”

But what if my goal is to learn everything?

I started my day attending the Opening of the CSW63 Session in the General Assembly. I was the only Young BPW delegate to receive a ticket (I got there early the day before to get the ticket!) So, it was a huge honor to attend.

They began with a moment of silence for the people lost in the plane crash in Ethiopia. Unfortunately, the woman sitting next to me did know one of the victims. I’m sure many more in the room knew those on that plane because it was full of humanitarians from around the region.

Then the speeches began. Please, take some time to listen to the opening session. My favorite part starts around the 22-min mark —

“…we all need to act. It’s not enough to just add women and stir.”

I know you will feel just as proud as I am that these people are spearheading gender equality issues around the world.

PGRpdiBzdHlsZT0nZGlzcGxheTogYmxvY2s7IHBvc2l0aW9uOiByZWxhdGl2ZTsgbWF4LXdpZHRoOiA0ODBweDsgbWF4LWhlaWdodDogMjcwcHgnPjxkaXYgc3R5bGU9J3BhZGRpbmctdG9wOiA1Ni4yNSU7Jz48aWZyYW1lIHN0eWxlPSd3aWR0aDogMTAwJTsgaGVpZ2h0OiAxMDAlOyBwb3NpdGlvbjogYWJzb2x1dGU7IHRvcDogMHB4OyBib3R0b206IDBweDsgcmlnaHQ6IDBweDsgbGVmdDogMHB4Oycgc3JjPSdodHRwczovL3d3dy51bi5vcmcvd2ViY2FzdC8xMzYyMjM1OTE0MDAxL0IxSjNERFFKZl9kZWZhdWx0L2luZGV4Lmh0bWw/dmlkZW9JZD02MDEyNjYyNjY4MDAxJyBhbGxvd2Z1bGxzY3JlZW4gd2Via2l0YWxsb3dmdWxsc2NyZWVuIG1vemFsbG93ZnVsbHNjcmVlbiBmcmFtZWJvcmRlcj0nMCc+PC9pZnJhbWU+PC9kaXY+PC9kaXY+Click here to watch the many broadcasted speeches from the opening event. Even though I was there, the room was so large that it was easier to hear with a headset.

Plus, I mean, everyone else was doing it… 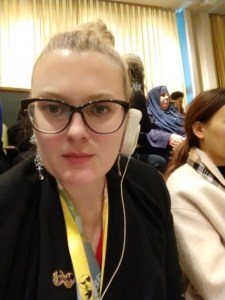 After this exciting morning, it was time to figure out which individual sessions I was going to attend.

Nearly everything was already closing their doors by the time I got out of the Opening Session, so I ran over to what’s called a “parallel” event (held outside of the UN) — the “Asian Model of Building a Gender Equality City.” I then attended the “Infrastructure to Combat Misogyny” meeting.

Next up: the “Gender Round-table: Making Space for Girls to Lead” event. This one was the most engaging because of its audience – girls! They showed up, some even in their Girl Scouts uniform, and engaged with the presenter, basically calling him (yes him) out on not doing enough to help ALL girls in all age groups, AND for not focusing on the real issue here – educating the boys & men to not harm the girls. I mean – c’mon! YAS! It was awesome.

A few more meetings (events) later, I was back in the hotel room remembering my day. I felt like one small person (me) had run around New York City, learning about the issues women and girls face all over the world. And for a moment, I felt so BIG.*NGO – non-governmental organization. The NGO I’m with is Business & Professional Women International. Our goals in these talks is to push the agenda of the group, which you can click to read here. (BPW written statement with recommendations) 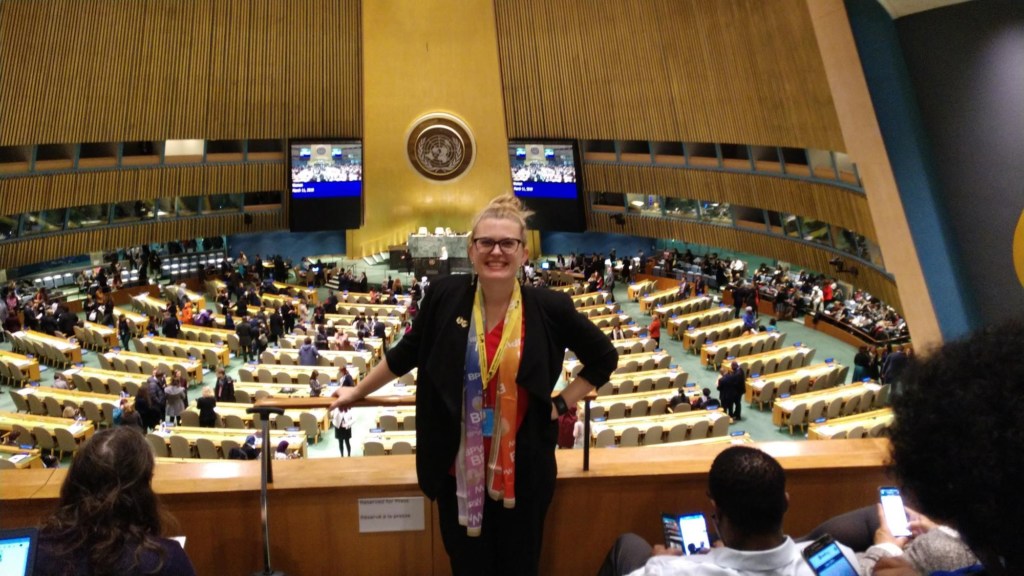