A Tarheel born and bred

A Tarheel born and bred

For This Hollywood Director…

Director Ashley Maria is a Tarheel born and bred, but professors and friends both told her the only way to “make it” in film was to be in Hollywood. Determined to succeed, she went west in 2009.

When her most recent project, Pioneers in Skirts brought her back to North Carolina for an interview with the UNC women’s basketball head coach Sylvia Hatchell in 2013, she saw an opportunity to weave together her two homes.

“I’ve always wanted to be bi-coastal,” Ashley said. “When my producer and I had to interview teen girls for the film, we decided to stay in North Carolina to find them! We ended up following NC-teens for three years — which has allowed me to travel back home a lot more than I’d been able to before. That was real nice.”

But splitting time between two coasts presented a few interesting problems for Ashley; namely where to live and how to afford it. She juggles freelance writing, directing and production sound recording with paying rent on her LA Koreatown apartment and scraping together funds for plane tickets with an unusual cheer.

“You have to make it your new normal, and elevate yourself. If you think about the amount of work this all requires then you’ll be overwhelmed. So you just make it a part of your daily life.” According to Ashley, the benefits of being bi-coastal are worth the long hours.

In North Carolina, Ashley is able to stay with her co-producer Lea-Ann Berst rent-free. Lea-Ann is Ashley’s partner in crime, and the only other person working on the film full-time. She’s also Ashley’s mother. 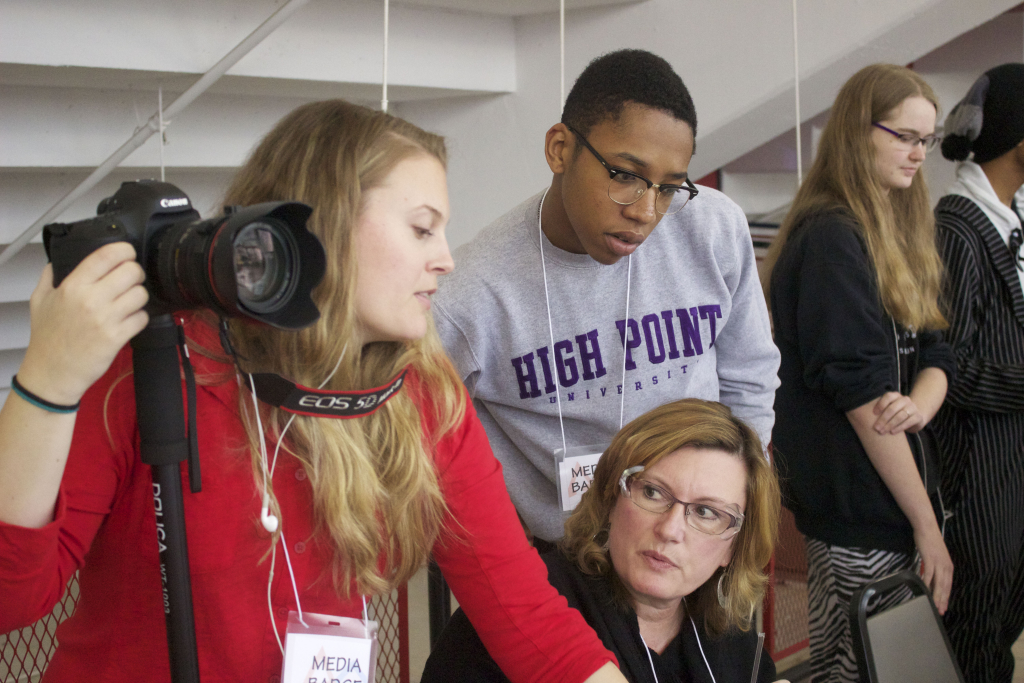 Ashley Maria on set with Lea-Ann Berst in Raleigh, NC

This is the second time Ashley and her Mom have teamed up — previously on the 2013 short documentary film called, Business & Professional Women: A History, A Movement.

“It took people a while to realize that I wasn’t just coming to North Carolina to visit my family for a fun trip, I was in North Carolina to work on making films,” she said. “Right now – well, it would be real nice to bring home the post-production work we’re doing on Pioneers in Skirts. It’s a special wish I have, but the money to do that just isn’t there right now.”

“I’m extremely happy about the new incentive packages that North Carolina just announced,” shared Ashley. “But because Pioneers in Skirts is a low budget it won’t qualify. I’ve got narrative features in mind for that.”

Despite her visits to home being work-focused, she says she feels recharged when she returns to L.A. from an east-coast stint. “One of the best things about coming home to North Carolina is the weather. Oh, and the traffic isn’t terrible like Los Angeles,” Ashley said.  The east coast is still home to Ashley, but her Californian connection isn’t something she’s willing to give up.

“I love the Hollywood scene – watching movies, talking about movies, getting excited about stories, and, of course, the empowering conversations I have with my friends and fellow filmmakers. In addition to the wealth of jobs in LA, it’s really the hub of the Hollywood industry. I bring all of these experiences back to NC which creates that flow of information between both coasts,” Ashley said.

When asked if she’s ever considered a permanent transition to one place or the other, Ashley shrugs. She says there is too much of her in both places to consider ever leaving either of them.

At the end of the day, she’s determined to remain bi-coastal for as long as she can.